I left Northfield at 7:30 am yesterday as the snow storm was just cranking up, thinking that an extra hour would be sufficient for 35 mile trip to Best Buy HQ in Richfield for the 2010 WordCamp MSP. I was scheduled to present during the first round of sessions at 9:30. At about 8:30, I tweeted: "Traffic on I35 one mile south of Lakeville is at dead stop. #wordcampmsp hosed"

After sitting there for 20 minutes, I began preparing to send out another tweet to tell the WordCamp organizers that I wasn’t going to make it in time. But suddenly, traffic began to move so I held off and arrived at 9:15. When I found chief WordCamp organizer Lauren Freeland, she told me that they’d seen my tweet and bumped my session up to 10:30. I thought, "Jeesh, these people have their shit together."

As it turned out, I was able to do my WordPress Basics for Noobs session at 9:30; I also did a session at the end of the day: Blog-Based Conversations: Tools and strategies for managing comments and the people who make them. Both were well-attended, I got lots of great questions, and was pleased with the informal feedback I got from people afterwards.

WordCamp MSP was a well-run conference, starting with the venue, the food, and the range of sessions offered.  As a speaker, I was impressed with the whole process, including their terrific blog site and all the helpful email communications with Lauren Freeland and Brian Goeppner leading up to the event. A special tip-of-the-blogger hat goes out to the tech support volunteers who rescued me at my first session when hook-up to the screen projector failed.  Twice I overheard people talking about how helpful the WordPress troubleshooters were at The Tech Shop onsite. What a great idea that was.

WordCamp MSP 2011?  I hope so. In the meantime, I’ll be a regular at the MSP WordPress User Group.

2:30 PM Update:  A WordCamp album of 43 photos by Lauren Melcher posted to the TECHDotMN’s Flickr account, including one of me not paying attention. 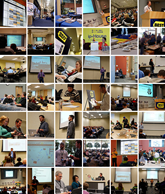