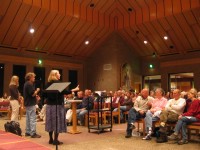 Explorer Will Steger spoke on global warming tonight to a crowd of almost 500 people at Bethel Lutheran Church here in Northfield, along with two colleagues, J. Drake Hamilton, Science Policy Director at Fresh Energy, and Alycia Ashburn with the Lutheran Coalition for Public Policy in Minnesota. Steger’s foundation has launched a project called Global Warming 101 which “… raises broad public awareness about global warming as witnessed through Will Steger’s polar expeditions.”

Back in 1993, two of my sons, Collin and Graham (then ages 16 and 12) accompanied Steger and fellow explorers to Yellowknife and the Arctic Circle for six weeks to help with the ham radio and internet communications for a training run for the International Arctic Expedition … ultimately held two years later. I was delighted to catch up with Will again. My wheels are turning already on how I could become involved in his next expedition, set for early next year.

L to R: Dan Kallman and the Bethel choir; Brianna Spittle and my daughter Gilly Wigley get a poster signed by Steger for a donation to the foundation; the audience at the booths in the vestibule at Bethel. Click photos to enlarge.