I installed Google Moderator ("Helping the world find the best input from an audience of any size") last week on the blog site for Edina Citizen Engagement.  We’re testing it out as a way to solicit questions from Edina, MN citizens about four projects during the month of October, 2011.

I chose Google Moderator because I think it could help to address some common citizen engagement problems:

I think that the tool provides a simple and inexpensive way to gather and prioritize the questions.

I don’t have a catchy name for any of this yet so for this month it’s just October Q&A. I’ve created an FAQ page, as well as a Google Moderator how-to video/screencast.

When we’ve collected the prioritized questions, we’ll select a time and method for city leaders to provide answers online, either via:

I’m learning my way into this and so I expect to make mistakes and improve.  I’m also assuming that it’ll take a while for Edina citizens to find out about this and get comfortable using it.

I’ve been getting to know members of the Edina City Council recently, talking with them by phone and meeting with some of them. My main goal is to update them about what Edina City Manager Scott Neal and I have in mind for Edina Citizen Engagement and getting their ideas for what we might do this fall and how to involve them.

Late last month I met with Council member Mary Brindle, Mayor Jim Hovland, and Council Member Joni Bennett.  I also had a chance to chat with Council members Josh Sprague and Ann Swenson at a recent Council work session. See the Edina Council bios page for more about them.

Yesterday I moderated a one-hour live chat with Edina City Manager Scott Neal about all things related to the economic development of Southdale Center, part of our Edina Citizen Engagement project.

I used CoverItLive to host the chat and it worked well. The only glitch was that I couldn’t get a photo of Scott to appear with his comments.

We had 21 different people attend over the course of the hour, with up to a dozen at any one time.  Seven people submitted questions and comments.

This was our first online event. I blogged the rationale for it here.  Scott blogged about it here.

In addition to the Southdale Center Economic Development project, Edina Citizen Engagement has two additional blogsites. One is focused on the Edina 2012 Budget and the other on the development of the Edina Grandview District.

I spoke to the Grandview District Steering Committee last week about how the site could be used for citizen engagement.

The first citizen engagement project will be focused on Southdale Center’s economic development.

Simon Property Group, Inc., owner of Southdale Center, has requested economic development assistance for the mall from the City of Edina, so the project aims to:

The blogsite for Southdale Center Economic Development  is now up. Follow the updates via its RSS feed, the Edina Citizen Engagement enewsletter, and Twitter. 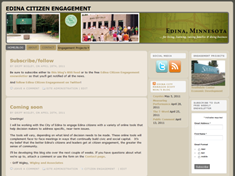 I’m going to be working with the City of Edina, Minnesota on a project called Edina Citizen Engagement. The city is seeking to engage its citizens with a variety of online tools that help decision makers to address specific, near-term issues.

The tools will vary, depending on what kind of decision needs to be made. These online tools will complement face-to-face meetings in ways that continually build civic and social capital.   It’s my belief that the better Edina’s citizens and leaders get at citizen engagement, the greater the sense of community.

A month ago, Eden Prairie MN City Manager Scott Neal announced on his blog that he’d accepted a new job as City Manager for the City of Edina, MN.  See this recent feature in the Star Tribune newspaper profiling his career: Edina’s new city manager has lifelong interest in governance.

Scott and I had breakfast last week at Turtle Bread in south Minneapolis near his home.

I got to know Scott when he became Northfield’s city administrator in 1996. Only 100 days on the job, he became our first guest in an online web forum that I moderated titled State of the City (transcript). When he departed Northfield for the city manager job Eden Prairie in late 2002, he became my second leadership blogging client (see this blog post of mine dated March 31, 2003).

(Left photo): When a delegation from the UK government visited Northfield during the summer of 2004 to learn about the civic leadership blogging in Northfield and Eden Prairie, it turned into a trip to the UK in Feb. 2005 for both us to teach local leaders there about leadership blogging (see the album of 240 photos).

(Center and right photos): Scott gave ceremonial keys to the city to the Royal Borough of Kingston Upon Thames when we visited the city, and Kingston Councilor Mary Reid (recently retired) did likewise when she and others from the UK visited MN for the International Symposium on Local E-Democracy and spent a day in Northfield (see my blog post with photos here) to discuss leadership blogging at the local government level. (See Mary Reid’s blog post on our visit here.)

Scott’s blogging taught me more about the power of a leadership blog than I taught him. I remember the most startling revelation for me was the extent to which he used his blog to communicate indirectly to the employees of the City of Eden Prairie. ‘Indirectly’ because the audience for his blog was primarily local citizens but his staff followed his blog closely.

Affirming people is one of the key ways to use a leadership blog and Scott consistently did this in his 7+ years of blogging as Eden Prairie City Manager. See this recent blog post where he singles out three employees for detailed recognition.

Will Scott be blogging in his new job?  Stay tuned.