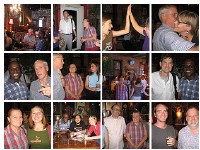 I worked at the magazine Utne Reader (now just called “Utne”) for most of the 90s. Last week, the magazine announced that it had been purchased Ogden Publications in Kansas.

Many former employees gathered at the Kitty Kat Club in Dinkytown on Thursday night. See the dozen photos in this Flickr album set.

Flickr automatically creates several sizes of the photo, up to 800 pixels-wide. If anyone wants one of more of the originals, suitable for printing, let me know.