I decided last week to take a month-long sabbatical from the blogging, podcasting, and tweeting that I do for Locally Grown, a hyperlocal blog in my hometown of Northfield. On Monday, Ross Currier, Tracy Davis, and I (AKA "the LoGroNo Triumvirate") met at our favorite watering hole, the Contented Cow, to decompress a bit and scheme for the future.

In the 4 years since we launched the blog, we’ve published 2,976 blog posts, broadcast 187 podcast episodes, and host an ever-growing gallery of 10,000+ Northfield community photos.  We get 8-9000 unique users/month in a town of about 15,000. The blog has generated 35,085 comments and has a reputation for civility which is no accident. We’ve been experimenting with an optional membership plan which currently generates less than $100/month.

Since I put 10-15 hours/week into it (blogging, curating, commenting, moderating, tech maintenance, podcast production, taking photos, etc), people often ask me why I do it if I’m only effectively earning $1/hour.

I tell them: for me it’s fun, it’s engaging, it helps keep me connected to people in the town that I love (and where I plan to die), and I think it contributes to making Northfield a better place.

(Other motivators for me: It provides a sandbox where I can experiment with social media, which in turn, indirectly helps my consulting business. And yes, it’s a bit of an ego trip because it provides an audience for my civic-oriented writing/ranting, my antics, and my photos for which I get some recognition.)

Two new books are out that provide some illumination on why people work on projects like this.

The June issue of Wired has an interview with the Shirky and Pink: Cognitive Surplus: The Great Spare-Time Revolution.

Pink: We have a biological drive. We eat when we’re hungry, drink when we’re thirsty, have sex to satisfy our carnal urges. We also have a second drive—we respond to rewards and punishments in our environment.

But what we’ve forgotten—and what the science shows—is that we also have a third drive. We do things because they’re interesting, because they’re engaging, because they’re the right things to do, because they contribute to the world. The problem is that, especially in our organizations, we stop at that second drive. We think the only reason people do productive things is to snag a carrot or avoid a stick. But that’s just not true. Our third drive—our intrinsic motivation—can be even more powerful.

So powerful that I’m taking a sabbatical from Locally Grown this month in order to get other shit done (AKA making money to pay the bills).

The National Civic Review, the quarterly journal of the National Civic League (“Now in its 98th year of publication”), has its Winter 2008 issue out. The issue has a 6-page article by Julie Fanselow titled Community Blogging: The New Wave of Citizen Journalism (PDF).

The article includes the Northfield projects I’m involved with, Locally Grown and RepJ, as well as my work with the Northwest Area Foundation and its use of blogs (CommunityBlogs.us) as a key component of its Horizons program which I blogged about here when I started with it.

I don’t know the Nieman Journalism Lab guys personally but Mathew Ingram’s blog post today, “Locally grown” news gets a boost acknowledged the good stuff happening with Locally Grown, the group blog and podcast that I co-host in my hometown of Northfield.

The ‘boost’ to hyperlocal sites like ours that he’s referring to is the new funding that RepJ founder Len Witt just got from the Harnisch Foundation to create a new Center for Sustainable Journalism (CSJ) at KSU in Georgia.

Representative Journalism (RepJ) creator Leonard Witt (professor at KSU in Georgia, Public Journalism Network blogger) arrived in Northfield last night for a series of meetings (through Saturday) on the Northfield RepJ project at its six-month point.

I took this photo of Len and RepJ reporter Bonnie Obremski having breakfast this morning.

I first blogged about my work with the RepJ project last Feb. and then again in March when the RepJ team visited Northfield.

In today’s Wall St. Journal: All I Wanted for Christmas Was a Newspaper; Bloggers are no replacement for real journalists.

Paul Mulshine, opinion columnist for the Newark Star-Ledger, misses the point when he argues that citizens aren’t likely to voluntarily ‘cover,’ for example, city council meetings for their blogs in the same way that a reporter does for a newspaper.

Yes, it’s valuable to have local reporters sitting through public meetings and then reporting on them.

But it’s more valuable for their stories to be published in an eco-system of civic engagement where the media, public officials and citizens are all involved in the effort to inform so that better public outcomes can occur.

Imagine a year from now that a version of the above chart (from last summer’s JTM New Pamphleteers conference) is happening here in Northfield. For example:

This eco-system of civic engagement can’t easily exist in a town whose citizens don’t blog or discuss issues online, whose media reporters don’t link, whose public access cable TV station only broadcasts analog video at select times, and whose public officials aren’t regularly making an effort to be more transparent and engaged with citizens.

In Northfield, I think we’re getting closer to a civic engagement model that really works.

(Not yet on the horizon: a Northfield News newspaper that selectively but consistently links to, excerpts from, and gives credit to local civic bloggers and online discussion participants in both the print and online versions of its stories.)

I don’t quite have the Vision Thing perfected yet but I’m getting closer.

Minnesota Public Radio’s Public Insight Journalism (PIJ) project hosted a moderated discussion last Friday night in their UBS Forum. A group of about 20 citizens selected from their PIJ database were invited to discuss the topic: The Press and the Public: What’s the new relationship?

A group of about 10 attendees from the Journalism That Matters conference, New Pamphleteers/New Reporters: Convening Entrepreneurs Who Combine Journalism, Democracy, Place and Blogs, observed the discussion for 45 minutes and then joined in… me among them.

In the PIJ handout that was used to help focus the discussion, Locally Grown (the blog/podcast that I co-host) was cited as an example of Approach 4: the public is the press.

Here’s the text (partial transcription) but click the photos of the doc to see it all:

There is no starker example of the divide between the press and the public than these statistics from a recent survey by Zogby International: Most Americans – 70 percent – say journalism is important to the quality of life in their communities, but almost as many (67 percent) say traditional journalism is out of touch with what they want from their news.

Established Numerology Name Calculator organizations can’t help but notice as newspaper circulation numbers fall and broadcast outlets see fewer people tuning in. The notion of the public as passive consumer of news is passe. What is emerging is a new model of journalism built on partnership.

The question on the table is: What should it look like? Here are four broad approaches that can help get a conversation started.

Jeff Jarvis, according to the Wikipedia, is an associate professor at City University of New York’s Graduate School of Journalism, directing its new media program. I found his blog post from mid-April, The press becomes the press-sphere, to be helpful in thinking about the changing nature of the press and the public. These images help: 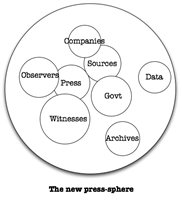 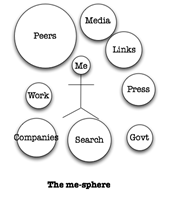 L to R: the way it was; the new press-sphere; the me-sphere. 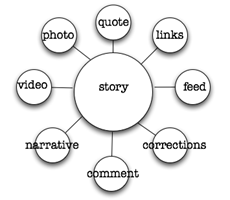 Jarvis: “Stories and topics become molecules that attract atoms: reporters, editors, witnesses, archives, commenters, and so on, all adding different elements to a greater understanding. Who brings that together? It’s not always the reporter or editor anymore. It can just as easily be the reader(s) now.” 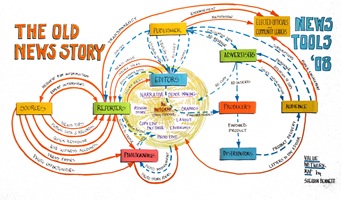 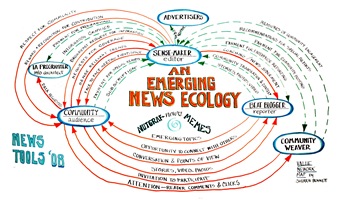 Jessica Clark at the Center for Social Media integrates the Jarvis and JTM models (and an LA Times model) with this Visions of the new news blog post. She writes:

The NewsTools2008 map demonstrates that, in the new ecology, community is crucial. It even introduces an unfamiliar term—the “community weaver.” His/her roles include inviting audiences to participate, and filtering reader comments. Meanwhile, in this world, it’s the community’s role to offer editors (now reframed as “sense makers”) tips on coverage, conversation with reporters (now lumped in with “beat bloggers”), content, and, of course, dollars. Are those communities publics? Well, it depends on the issues being addressed.

At Locally Grown, we’re trying to make this vision — or at least a version of it — happen.

Twitter is a service for friends, family, and co–workers to communicate and stay connected through the exchange of quick, frequent answers to one simple question: What are you doing?

Like my colleague Michael Fraase, I tried Twitter a few times when it was first introduced but it didn’t ‘take hold’ for me.

But after reading Howard Rheingold’s reasons for why he’s hooked on Twitter, I’m ready to give it another try, only with a local, Northfield twist. I plan to focus on SEO 101: On-Page and Off-Page Ranking Factors – my whereabouts in my hometown, as well as miscellaneous other Northfield-related musings. I’d like to ‘follow’ (that’s a Twitter term) other Northfield-area citizens doing likewise with their Twitter accounts.

I’ve got my cell phone and Google Talk (IM) account hooked up to my Twitter account so that I can send and receive messages with both.

I’ve added the above Twitter badge to our Locally Grown (LoGroNo) sidebar, about halfway down the page, right after the comments section). 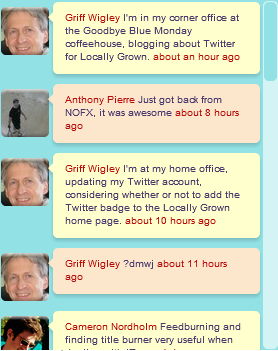 I’ll consider switching that badge to one like this (the above image is recent screenshot, not a live view) that tracks all the people I’m following who’ve likewise committed to focusing their Twitter posts on Northfield-related activities.

The community blog and podcast that I co-host in my hometown, Locally Grown, has been chosen to test an innovative project called Representative Journalism, led by Communication Chair and Associate Professor Leonard Witt and colleagues at Kennesaw State University in Georgia. See Len’s blog post for details, as well as this press release (PDF). 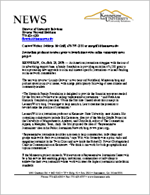 Over half of the $51,000 grant from the Harnisch Family Foundation will flow to Northfield. My co-hosts and I will be paid for our time on the project. The Representative Journalism (RepJ) project will contract with a professional journalist who will be based locally. And money’s allocated to experiment with different ways to make the project financially sustainable.

Project staff will be visiting Northfield in mid-March to conduct interviews and help us get launched.

I teamed up with the folks from the Sitting Bull College Horizons Project to teach a community blogging class in Minot North Dakota yesterday. We had about a dozen people from both the Spirit Lake Nation and the Mandan, Hidatsa, and Arikara Nation communities (also known as the Three Affiliated Tribes).

That’s Deborah His Horse is Thunder, Wiya & Associates LLC, in the left photo, helping a participant. Lyman Bercier, SBC Horizons project staffer for North Dakota, is in the photo on the far right. Click photos to enlarge.

I teamed up with the folks (David Isham, Susan Beaulieu, Al Nygard, and Deborah His Horse is Thunder) from the Sitting Bull College Horizons Project to teach a community blogging class in Bemidji yesterday. It was my largest class to-date, 15, with people from Red Lake, White Earth and Leech Lake communities. With that large a group, it was hugely helpful to have collegial assistance!

I was a bit of a laggard on taking photos until the end when Horizons Project Director Al Nygard took over. Click photos to enlarge.

A tip-of-the-blogger-hat to the Information Technology Services staff at Bemidji State University for the use of the Mac computer lab.