I spent a day last week at Red House Media (RHM) in Brainerd, MN, conducting a staff training session on how to use Basecamp, the web-based collaboration/project management service by 37signals which I’ve used since 2004.

I’ve gotten to know RHM’s founder and CEO Aaron Hautala in the past year, as we have a mutual love of mountain biking. He’s president of the Cuyuna Lakes Mountain Bike Crew, the club which helps manage my favorite MTB park, the Cuyuna Lakes Mountain Bike Trail System in Crosby/Ironton, MN. When I offered to help with the club’s blog site and mentioned that it would be best if we used Basecamp for our communications, he told me that his company had been using it for a while but wasn’t quite getting full use of it.  He wondered if I was interested in helping.

The night before my training session, I discovered that 37signals had announced a new Basecamp last spring, and that the one I was using was now called Basecamp Classic. Oy. Evidently I’d unsubscribed to the Basecamp enewsletter years ago and thus, never got the memo on the new version.

Once I took a look at the features of the new Basecamp, it became clear that this was the version I needed to present to the RHM staff. So I crammed into the wee hours, moving a couple of my own Basecamp Classic projects over (easy) to the new Basecamp for experimentation.  I was wowed, visit website if you would like to learn how I did it.

I showed up the next morning, prepared but still sweating it. I told my tale of woe to RHM staffers Heidi Lake (media director), Keith Larson (art director), and Anna Johnson (newly hired production manager). They were more than understanding and whenever my lack of knowledge became apparent, they gamely joined me in a hunt for answers.  By day’s end, they were off and running. I was tired but pleased and excited about getting my own Basecamp Classic projects moved over to the new Basecamp. If you use Basecamp, you should, too.

I’ve taken on the revamping of the site for the Center for School Change in St. Paul, moving it to WordPress and adding a blog.

I’ll soon be coaching Joe Nathan, Director; Kabo Yang, Associate Director; and Paj Ntaub Lee, Outreach Coordinator, on how to update the site, blog, and use other social media tools to support their work.

I’ve been working with the Detroit Revitalization Fellows the past few weeks, helping them to launch a project blog called 8 Weeks Under 8 Mile: Buying local in Detroit. 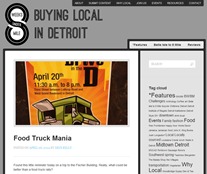 8 Weeks Under 8 Mile is an experiment to understand what happens when you redirect your spending exclusively toward Detroit businesses.

8W/8M aims to enhance personal, regional, and national awareness of the benefits and opportunities for buying local while promoting the great retail that presently exists in Detroit. This concentrated effort by the 8 Milers (challenge participants) aims to intensify personal interaction with local businesses and document Detroit retail opportunities.

Michael Forsyth and Erin Kelly are the two Fellows who are doing most of the heavy lifting on the project.

It was way back in September, 2011 when I had a celebratory lunch in St. Paul with my colleagues, Curt Johnson and Jay Walljasper. We’d been given the go-ahead by the Kresge Foundation on our proposal to assist the Detroit Fellows “in the effective use of telling their stories and sharing their experiences through blogs, Twitter, social media, articles, personal essays, op-eds, video scripts, spoken presentations, and other media.”

That’s quite a laundry list but the basic idea is a simple one: use media of all kinds to give the work of the Fellows as much impact as possible. 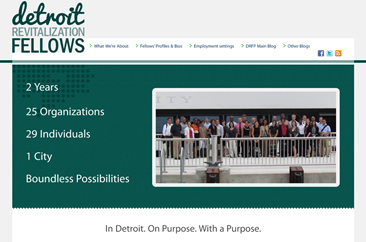 We now have the website up for the Detroit Fellows project. I’ve been working closely with one of the Fellows, Eric Anderson, on the creation of the site.

The site has a Fellows group blog where they’ve started blogging and where Jay has published some of his Fellows’ profiles. We also have our own Citiscope/Detroit Fellows blog where Curt, Jay and I now have our initial blog posts up.

My job is to offer coaching to those Fellows interested in using social media tools as a way to leverage their leadership.  We’ll focus mainly on blogs and Twitter.

I’ve been speaking to each of the Fellows by phone in the past couple of weeks to introduce myself, learn more about their work, and give them a quick overview about the kinds of things my coaching would involve.  I hope to start working with a small group in April.

I’ve been coaching leaders in the use of blogs and other online tools since 2003, but this will be the first time I’ve taken on a group of community leaders.  I’m looking forward to it.

I got together with Curtis Johnson and Jay Walljasper for lunch at Muffuletta’s in St. Paul last week. I spent much of the 90s at Utne Reader when Jay was editor and I was the new media guy. I’ve been doing blog-related projects for Curt and his Citistates colleagues since 2004, where Jay is one of the associates.

The occasion? We’ll be working together with the Detroit Revitalization Fellows Program at Wayne St. University, funded in part by the Kresge Foundation.  The program is:

… designed to attract, develop and retain promising young professionals who will help lead the economic revitalization and development of Detroit. This talent pool is being cultivated in order to build the capacity of public, for-profit, nonprofit and quasi-public organizations, including Detroit’s anchor institutions.

We’re doing this project under the Citiscope umbrella, a Citistates Group project. I’ll provide more details in the next few weeks as our work gets going.