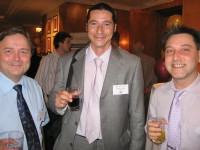 Christoforos Korakas is a Project Manager at Access2Democracy and an expert on eVote/eDemocracy for the Research & Academic Computer Technology Institute of Greece. We had a chance to talk after his session and there may some areas of collaboration, especially regarding web forums.

Left photo (click to enlarge): Christoforos was one of the panelists for Friday’s Day 3 session: From e-Voting to e-Participation: Connecting Governments, Parliaments and Civil Society in Europe.

Right photo (click to enlarge): Christoforos is in the center. On the left: Lasse Berntzen, Vestfold University College, Norway (Lasse has both a research page and a blog on e-Government and e-Democracy where he posted about the Budapest symposium); and on the right, Daniel van Leberghe, Politech Institute, Belgium. 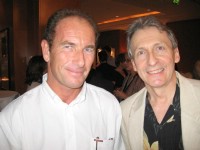 At tonight’s reception here in Budapest, I had the honor of meeting Etienne Chouard (left – click photo to enlarge), a French citizen who has a very influential, anti-EU Constitution referendum weblog. See this BBC News article from last year for some background: Bloggers take on European elites.

I couldn’t attend his panel session today (“One Man, One Blog, One Constitutional Crisis”) because I had my afternoon presentation at the same time. But he attended my morning session and told me that, unlike most everyone else at the conference, he could understand my English. Another plus for How to Talk Minnesotan.

Griff: “So, Etienne, do you think a lotta guys could learn to blog like you, then?”
Etienne: “You betcha.”

From tonight’s reception, 3 video clips of Hungarian music and dancing and a 4th of the audience in a line dance.

I’m using Yahoo email to post this, rather than using Blogger’s rich text editor. Some of my clients seem to prefer this method.

It does the normal bold, italics, underline, and text color/size, plus highlighting.

But it doesn’t allow you to embed photos/images. And it embeds advertising messages at the bottom of the post that have to be removed manually, unless you pay for a premium Yahoo email account. Google’s GMail is similar. I assume MSN/Hotmail is, too.

It’s not as detailed a blog as I’d hoped (and may never be) but our Cinque Terre weblog from our fall trip is finally up, along with a gallery of 150 carefully selected photos.

Today, I created a podcast for my NCO executive director weblog and made five “shows” — each a rehash of a previous blog post. I used my $5/month account at Audioblog.com to record them and publish them. They take care of the iTunes publishing, too. See this blog post there for more details.

I have a new part-time gig as Executive Director of Northfield Citizens Online, the non-profit in my hometown of Northfield, Minnestoa, USA, just south of Lake Wobegon. (We maintain a citizen journalism/civic blogosphere website called Northfield.org.)

I’ve created a new weblog for this new role. I’ve been teaching the art of leadership blogging for the past couple of years. Now I have to actually do it. Oy.

As I explain in this post, “…to help myself get better at my own leadership blogging skills, as well as to have another way to teach others as blog coach, I’ve created these weblog categories to help illustrate the art of civic leadership blogging.”

In other words, nearly every blog entry will be assigned one of these “leadership blogging” categories in addition to other traditional categories:

I got an email today from a longtime colleague, Ed Vielmetti, informing me that this blogsite comes up #1 in a Google search for “weblog coach” I then checked MSN (it’s #1 there) and Yahoo (it’s #2 there). Cool. 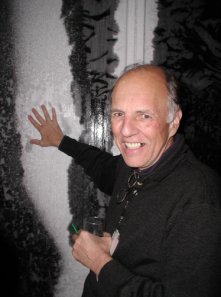 I met Buzz back in Feb of 2004 at Cecily Sommers’ PUSH conference in Minneapolis (where I took the above photo of him). And I’ve know Julio since my days at gofast.net in St. Paul in the late nineties.

I’ve emailed some questions about the piece to Buzz. More to come, maybe. BTW, I’m quoted in the story:

Business blogging is vital because it lets company leaders engage in “storytelling,” said Griff Wigley of Northfield-based Wigley and Associates, a consulting and blog-coaching firm. “It lets them capture little incidents from their days and weeks in which they exhibit leadership capabilities.”

Update Oct 25: I took photos of the front page coverage since Buzz abandoned his Minnesota roots for Florida and probably doesn’t get the print edition. And the graphic is priceless. Click either to enlarge. I’ve also suggested that he link to his Buzzmodo (“just about ideas”) and Buzznovation (“aggregating ideas inside technology” ) blogs from his ActiveWords site.