I was the trainer last night for a Horizons community blogging class in New York Mills, MN, home of the New York Mills Regional Cultural Center and the Great American Think-Off.

Lori Rothstein (right) is the Horizons coach in northern Minnesota and we teamed up to whip the gang of troublemakers (left, click to enlarge) into shape.

A tip-of-the-blogger-hat to Ben in the New York Mills High School Media Center for hosting the class. 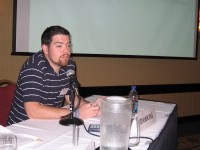 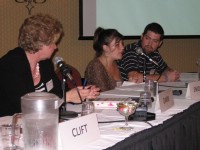 I took these photos of Tom Dawkins last week. (Click to enlarge.) He was one of presenters on the Innovative Ideas to Stir Citizens panel in Baltimore..

He’s the founder of Vibewire Youth Services in Australia and, according to this post on Steve Clift’s Dowire.org blog, this month he’s:

“… travelling around North America during August as part of a research trip to learn more about work being done around … digital/indie/youth media; online community; youth spaces (as in physical spaces, not virtual – specifically those designed to engender creative expression and/or enterprise development); digital arts/creativity; youth and citizenship; e-democracy.”

I just got an email from a UK colleague who I met in Budapest, Alice Chicken at 21Consultancy, alerting me to the fact that Tom just launched a weblog called tomd’s blog. In his initial post on Monday, he writes:

I’ve wanted to start a blog to give people, Vibewire.net members especially obviously, an insight into some of the background to Vibewire and our projects, a taste of some of the ideas floating around or projects which haven’t officially launched yet, more of a sense of the people behind the site and the Vibewire organisation and an opportunity for dialogue and feedback.

… in Baltimore last Thursday August 3, the day after I wearily arrived in the US. One of the sessions I went to was on ‘Leadership blogging’ (as opposed to perblogs, news blogs, opinion blogs, etc) by which he meant blogs kept by people in a leadership role (CEO, elected reprentatives, etc) which allow them to bring people into the decision-making process, to record a record of their thoughts, think through issues and so on. It all sounded exactly like what I’d been contemplated so I vowed to myself that at the next opportunity I really would start one this time.

Welcome to the blogosphere, Tom.

Before I departed Baltimore yesterday, I snapped some photos of the inner harbor, just a block from our hotel. Just like my favorite shots of Budapest, here are my favorites from Baltimore. Click photos to enlarge.

Wondering about the costumes worn by the people by the pool and fountain in the last photo? They’re attendees from the annual Otakon convention, which includes a costume contest. According to the Wikipedi entry, “Otakon is a fan convention focusing on the art of anime and manga, East Asian culture, and its fandom.”

The Public Forum Institute was a partner for the Symposium and in Baltimore, they took over all the tech tasks for all the presentations.

They also deployed their eForum audience response system which, as described on their website,

“… transforms audience members into fully engaged participants, enabling them to make a valuable contribution throughout the course of our forums. Forum participants are given wireless, handheld units to anonymously respond to questions posed throughout the day by speakers, moderators, panelists, or each other. Results are immediately tabulated and displayed on monitors or screens for all to see – providing instant citizen feedback for policymakers and timely statistics for reporters covering the forum. Keypads help the Forum turn a dry, one-way flow of information into a dynamic back-and-forth between hundreds or even thousands of motivated participants.” 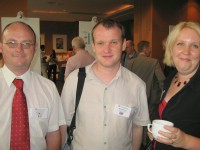 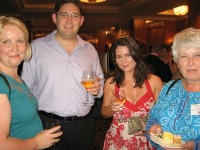 Antonia Bance is a blogger and a Labour councillor for Rose Hill and Iffley ward in Oxford, UK. She was an attendee in Budapest last week (far right in left photo; far left in right photo – click to enlarge). 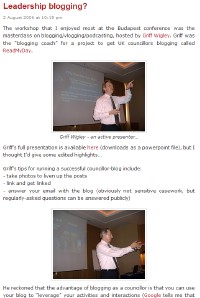 When she returned home, she posted a note to her weblog detailing her reactions to my session on Leadership Blogging.

“The workshop that I enjoyed most at the Budapest conference was the masterclass on blogging/vlogging/podcasting, hosted by Griff Wigley.”

My UK colleagues and I took time out yesterday afternoon to tour downtown Baltimore and its inner harbor via the Ride The Ducks amphibious vehicle.

In the evening, we and 44,000 others watched a baseball game between the Baltimore Orioles (yay) and New York Yankees (boo) at nearby Oriole Park at Camden Yards. In an exciting, back and forth game, the Yanks won 5-4 with a 9th inning home run.

See this Flickr photo set for a dozen+ photos of the day. 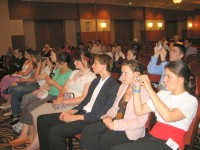 I got notified via WordPress pingback that someone had linked to the ICELE blog. I checked and saw a blog post by Budapest attendee Ben Rogers titled I have Started to blog because… in which he wrote:

I have started blogging because i was sent to budapest by the British Government in order to learn all about e-Participation, Social Inclusion, Democratic Engagement. After a talk about the power of blogging and how to do it… i am now joining the ranks as it were!!!

Ben plans to use his weblog to chronicle his year as a Deputy Member of Youth Parliament (DMYP) in the UK. (See more about Ben on this 2006 MYP Profile page about him.)

I noticed that I didn’t have a good photo of Ben from the conference, other than one of him taking a photo which I cropped from the group shot on the left. (Click photos to enlarge). So I emailed him and asked for another photo and he sent me the one on the right, along with an email reply that included this:

I have set up the weblog and will build on it very shortly — but have been busy and i’m off on Holiday tomorrow (only in the UK) so will really get it going when i get back!

Thanks once again for e-mailing- it is so nice to keep in contact with different people from all over the world- so many times i have come back from places and everyone goes quiet! And this is what the Internet is all about keeping in contact and making a difference.

Welcome to the civic blogosphere, Ben. 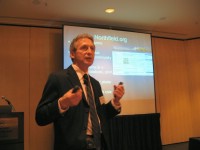 Steve Clift took this photo of me presenting this afterno

on at the Baltimore Symposium. What am I clutching? A laser pointer and a remote screen projector controller. Click to enlarge.

Note the Northfield.org slide in the background. It’s reminiscent of the photo from my presentation at Westminster in 2005.

Since I blogged a photo out the window from my hotel room in Budapest last week, I thought I’d follow it up with same here in Baltimore. The conference hotel overlooks the harbor on one side and Camden Yards on the other.

I flew here from the Twin Cities with my colleague, Steve Clift who’s chairing a panel tomorrow at the symposium. Steve was one of the organizers for the first International Symposium on Local E-Democracy held last year in Minnesota — with a field stop in Northfield, my hometown, which I blogged about. See my 2005 symposium photo album. The photo above of (L to R) Steve, me, and Dylan is from that event. Click to enlarge.

I’m here in Baltimore, visiting the offices of The Power magazine, one of my clients. William Wingo, publisher and author of the PowerSpeaks weblog, took the videoclip (1 minute) of me with Lisa Lawson, the staff person I work most closely with. Later, William treated me to a fabulous crab dinner at a restaurant on the harbor. Click photos to enlarge.