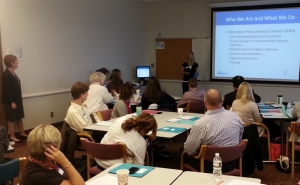 Steve Clift, founder and Executive Director, E-Democracy.org has asked me to do a presentation tonight for a class he’s teaching at the Humphrey School of Public Affairs titled Social Media: Engaging Democracy and Communities Online.

He’s asked me to talk about my civic leadership blogging coaching, as well as my current citizen engagement consulting work. I plan to take the class on a web tour while I speak to them about both.

With my civic and business hat on, I’m hosting a free webinar on social media use by local government on Monday, Nov. 1, at 8 PM CDT. It will feature:

The panelists (all bloggers), all have some Northfield connections:

Some photos of Betsey, Steve and Scott in Northfield from 2004-05 with their blogger hats on:

Please register for the free webinar on social media use by local government for Monday, Nov. 1, at 8 PM CDT.

If you’re unable to attend, the webinar will be recorded and archived on the web.